We delayed the start of the trip by a day due to
weather and changed the agenda for the trip to
attempt Clingman's Dome on the way
back home instead of today.

We left home early and slowly made our way
to Dandridge Tennessee.

We were somewhat amazed as the weather
was remarkably good.  The forecast had
called for storms to occur most of the day.
Things were going well until Nana said something
like"I Thought it was supposed to rain!"  About
30 seconds later we encountered a massive
downpour which, as it happens, lasted a mere 2 minutes.

After about 10 miles, Nana says "Well at least it didn't
last that long."  About 1 minute later, yep you
guessed it, the downpour started up again!  This
time it lasted about 20 minutes but we made
it through relatively easily.

You would never guess what happened about 10
minutes later.  Yes, she said something again and
sure enough - it started raining, well not really
raining, more like we were in the middle of a
hurricane!!  We were creeping along at about 15 miles
per hour for almost 30 minutes before the weather
finally cleared.  At that point I begged her not to
mention anything about the weather!!!

At the end of the day we made it to our hotel with a
total find count of 6 that we had managed to find
between all the Nana-induced rain storms.

This particular day had been set aside for a family
event.  One of our grandchildren was graduating
from High School and we attended the ceremony
and then partied back at the house with all the
normal BBQ stuff.

We managed to grab a couple of caches after the party
on the way back to the hotel.  Our finds for the
day totaled 2 - one guardrail find and one
lamp post cache!!!

The plan for the day was to make our way to
Florence Kentucky where we had a reservation
at a hotel which would serve as our base of
operations for GeoWoodstock 2018!!! 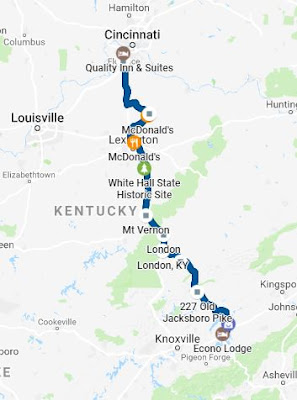 Everything went as planned, the weather was excellent!!!
We had a great day.

We awarded Favorite points to:
GC7KMMV - the walking dead - this town just
happens to be the childhood home of Robert Kirkman!!! 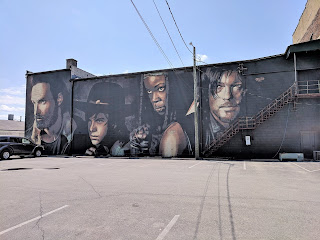 Disappointments for this day included 2 DNFs as
well as not getting a look at the ARK!!!
For those not familiar with it - check out GCNAPC
which led me to believe we might be able to
see the ark from GZ - but alas - NO, plus there was so much
construction at GZ we did not even stop for the cache!!!

The plan for the day was to make as much progress
as we could on completing the Donut Trail!!! 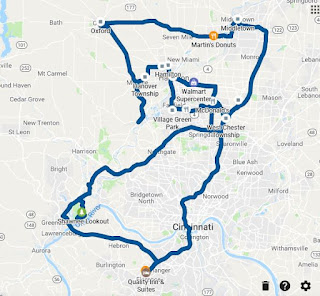 Everything went as planned except for the fact that 4
of the shops were closed on Mondays - guess that
is why we scheduled two days to
complete this Geo Tour!!!

After completing what we could, we headed on
over to Ohio's oldest geocache!!!  After a short
hike and meeting some other caches in the area for
the Giga, we made  it to the top and enjoyed the
view of the rivers!!!

After finding the oldest active geocache in Ohio, we
made our way back to our base  of operations
via Indiana and stopped in a small strip mall to
retrieve our first Indiana find!!!

We awarded Favorite points to:
GC31A - Shawnee Lookout Cache - Wow what a view from up here!!!

Really, the only disappointment for today was not
completing the Donut Trail in one day but we had
planned on two days minimum to start with.
20 Finds and NO DNFs - so the day could
only be so bad!!!

That is all for now