After more than one failed attempt - mainly due to the ever-changing weather of the Hampton Roads area - a small group of S.L.O.G.G.E.R.S. finally managed to pull off our first adventure.

What are S.L.O.G.G.E.R.S.????  Well, through several different iterations of the acronym - we finally settled on Sexy Looking Older Geocachers Going Everywhere Relatively Slowly.  Or, in other words, mature geocachers who can't move as fast as the young ones!!! 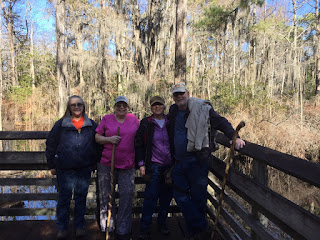 We all met up at First Landing State Park about 10AM, visited the Trail Center to check on the condition of the trails, and then headed out to see if we could locate some of the geocachers in the area. 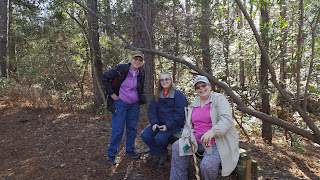 Somewhere in the middle of our day we came upon a tree, slightly off one of the trails.  Mysteriously, it appeared as someone had been doing quite a lot of work on a small out-of-the-way hideaway.  A cabin in the woods?  One of the ladies in the group had a small "Peanuts" figurine of Lucy, so we stopped for a few and let Lucy explore.  I was told later, that even though she enjoyed the small cabin, she elected not to stay.

A little over 3 miles later, after almost 3 hours, we finally made our way back to our vehicles.  After resting for a few we made our way to a local eating establishment, laughed about our day, and then decided we must do this again!!!

I will try to put together another group outing in February.  Hopefully we can find a weekend where the temps are not too cold.  It was also suggested, that we try something in Newport News Park!!! 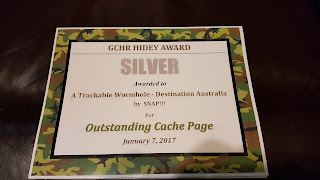 The first award we received was for Outstanding Cache Page.  GC4TTVJ - A Trackable Wormhole - Destination Australia was awarded the SILVER award. 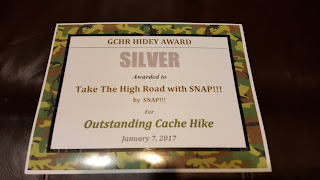 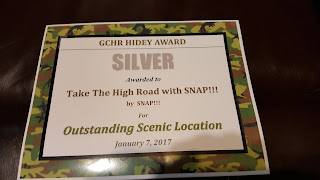 The second and third awards we received were for Outstanding Cache Hike and Outstanding Scenic Location.  GC6G5BZ - Take the High Road With SNAP!!! won SILVER in both of those categories. 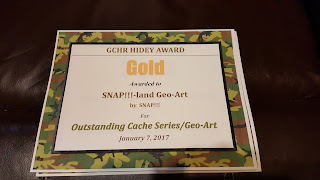 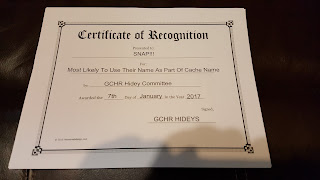 Additionally we received a Certificate of Recognition for:
Most Likely To Use Their Name As Part Of Cache Name.

We want to thank all of the geocachers who either nominated or voted for one of our caches.

We appreciate all the votes and awards.

Stay tuned... we have some more coming soon!!!

The Winner of the "SUPER-COVETED"

So last week we teased everyone with the FINAL 14!
It is now slmost time to name the winner...
but first:

Note: The Smithfield Visitor's site (click here) actually lists Geocaching
(and this cache) as an activity to help bring in tourists!

THIS CACHE IS NOW ARCHIVED

but there are plenty of replicas around

In 5th place:
GC2GW5D: Benedict's Brother-In-Law
Sometimes you find surprises while geocaching.  Nana & I love caches with history.  This one qualifies both as historical and a surprise find. 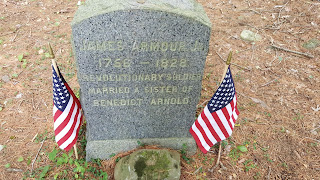 In 4th place:
GC6C9HP: Dead or Alive
A really nice put together multi-cache located in Surry County.
The scenery is really nice here too.

In 2nd place:
GC7C06: Witch's Leg
Most of you already know, we love historical caches.  Also, Nana loves caches in and around cemeteries.  So every once in a while we run across a truely great cache that is in a cemetery, has some great history and in this case: has a spooky story to go with it.  We were on our way to Canada, traveling up Rt 1 along the coast, when this cache appeared on our screens.
If you are ever up this way - make sure to put this cache on you "Must Do" List!!! 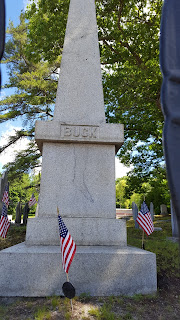 So, FINALLY:
The WINNER of the

SNAP!!! Cache of the Year 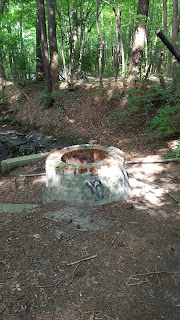 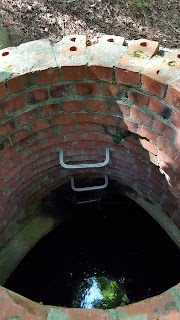 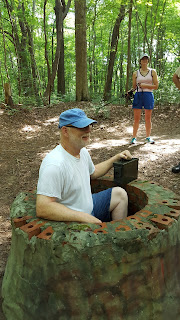 but truth be told,
it was a group effort. 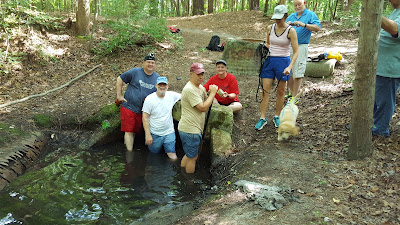 Thanks goes out to the entire crew:
C_Otter, Nana, chihuahuak94me,
micromagnet and shipwreck99
who provided moral support, suggestions,
hints, took pictures and movies, shouted encouragement, etc.
but most of all, Thanks to
my 2 good AACC buddies who got wet with me:
DiverVan & mbbaumann 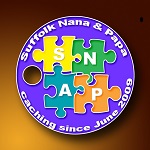 This year we are having a terrible time figuring out who the winner was.  We have worked on the list and have the FINAL 14 figured out and have decided to sleep on the list for a few nights to make sure the winner is the right one!

Back in April we ran across this really interesting Multi-cache near Surry.  GC6C9HP - Dead or Alive - hidden by kekj.  A really well laid out cache that involved a little more than the average cache.

Also in April, we ran into a cute little cache in Virginia Beach - GC68RXX - Swirly - hidden by steve-n-kim.  Interesting and cute, very cute.

We really like crafted caches so when we ran into - GC5ZJ9N - Old Virginia Beach KOA Marvel - hidden by KangaCacher and maintained by Episcodad it was a sure winner for the Cache of the Day Award.

We were in Charlottesville in June and ran across a very scenic cache - GC15ENQ - All Seeing Cache - hidden by Team Quanderers and adopted by Helpercache.

While on our trip to Canada in July, we found GC2GW5D - Benedict's Brother-In-Law - hidden by gamestermike89 - a historic cache!

An interesting Virtual Cache we found, also on our way to Canada, was - GC7C06 - Witch's Leg - hidden by The Duo Plus ?

The main target of our trip to Canada was - GCBBA - Geocache--Canada's 1st geocache - hidden by ken kane.

While on our trip to Canada, we took a side trip to Prince Edward Island to locate Virtual Cache - GC7C82 - Elevation Zero - hidden by LaurieM and Dad.  This is our Northern-most cache!

If you are ever passing through Scott County Virginia on Rt 58 - make sure you stop at GC3EY94 - HWY 23S TB DEPOT ~ TRAVELING THE TRACKS WITH KENNY - hidden by Scott County Tourism.

In August, Nana & I found this cache on our first try!!! GC2CKWN - GeoNana - hidden by Laura's Boys.

Another hard to find cache makes the list with - GC6P4YV - Bamboozled III - hidden by AllstarSS.

Last but not least - just off off I-95 near Rt 58 is a small peanut company store in a very old trading post.  Free samples of all their peanuts are inside but outside, under the front porch, you will find - GC4MK50 - Nuts for Virginia! - hidden by humphr1d

Nana & I will announce the winner soon!!!

On January 1, 2017 we had the first AACC event of 2017.   Part of the festivities was the awarding of the coin below to the winner of last years contest.

The WINNER?   Congrats to Wheels!!!

We did have quite a few cachers enter the contest for next year!!!