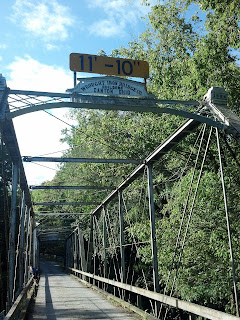 It really wasn't that bad a day overall.  We ended up a 13 hour geocaching day with 21 finds and 8 DNFs.  The first 5 geocaches we looked for were not your typical caches though. 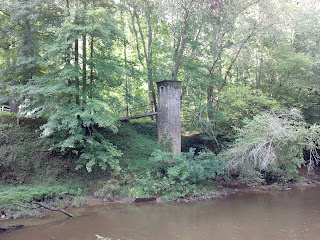 Jim & Lynne arrived in Suffolk at 7AM and we loaded up the bikes and the SNAP-mobile for a trip west.  An hour later we arrived at the first cache. 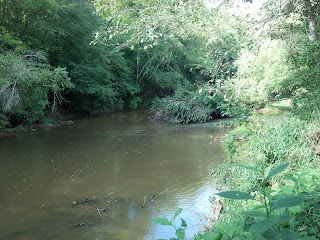 GC3P8X0 - Something's Missing.... hadn't been found since July and had a string of 5 other cachers that hadn't been able to locate it either.  We scoured the small area where it should have been extensively but still came up empty. 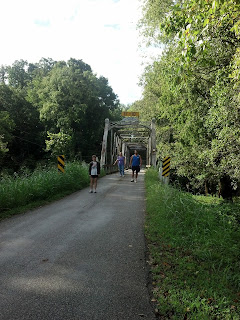 GC2DHHD - Hunting for Not so Sadler hadn't been found since early January.  We parked near GZ and made our way to the old building and the surrounding trees but failed to find this one either.
GC245D7 - Iron Bridge was an excellent site for a cache.  The bridge had been built in 1864 and is still in service today as a single lane country bridge.  The last finder of this cache was in November of 2011.  We covered the area pretty well before conceding defeat. 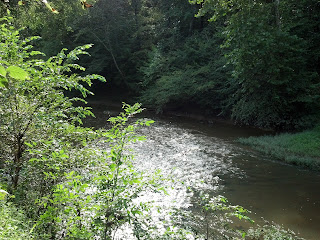 GC24NHT - Fort Christanna (Puzzle Cache) a very nice historic site.  Jim had solved the stage 1 puzzle and geo-checked his answer but we were still unable to make the find.  This one hadn't been found since November of 2010!!! 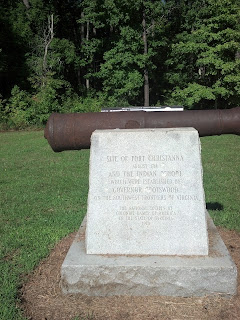 GC24R9Q - Peek A-Boo - we really had no excuse not to find this one.  The last cacher was in July and even though the place was very overgrown we dove in and searched for quite a while.  No luck here made this 5 DNFs in a row and we were almost 2 hours from home without a single smilie!

We drove up to Lawrenceville to try out a new Rail-To-Trail and hopefully grab a find.
GC2JP48 - Rail Trail #1 - After getting the bikes off the back of the SNAP-mobile and riding about a mile - believe it or not we grabbed a cache!  Jim found this one almost immediately.  A rather easy hide but all of us were happy to finally get a smilie! 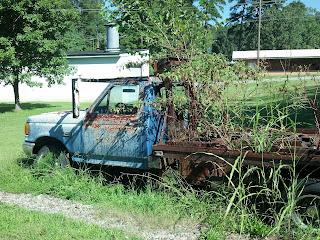 GC2JTEA - Rail Trial #2 - another 1/2 mile down the trail proved to be another quick find as I reached out and grabbed it just as I dismounted the bike!  On our ride back to the van we ran into some local cachers (kf4kbs & K4SDC & KI4KES), very nice people who informed us this part of the trail was getting ready to be worked on again and made longer!  Hopefully they will place caches along the newer part so we have a reason to go back to this lovely little town.  We really enjoy running into other cachers while we are out! 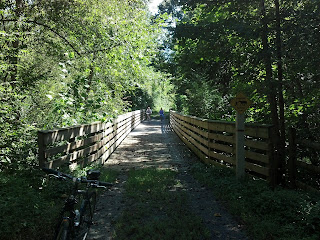 Once we made it back to the SNAP-mobile and loaded the bikes I happened to look at my phone and a geocaching map and realized there were two very new caches right there in Lawrenceville.  We added them to our hit list and headed out. 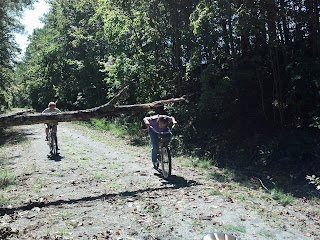 GC3W2QA - Lawrenceville Museum - we managed to make this cache much harder than it should have been but we finally made the grab and moved on to....
GC3W2PJ - Welcome to historical Lawrenceville - will someone explain to me how 4 cachers with over 7000 finds can make very simple finds so hard!!!!   We finally made the grab but this very simple cache took us far too long! 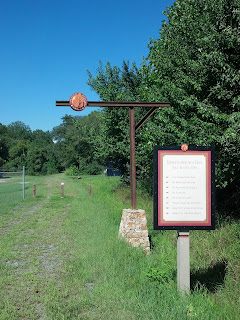 Heading a little northwest we stopped by a very nice park just outside of Lawrenceville for our next caches:
GC1172H - #31 DeLorme Atlas Chevrolet - a very nice walk in the woods revealed a nice size cache that Nana found quickly!
GC2KCWR - Watershed A - this was amusing - each of us checked stumps and trees all around expanding our circle bigger and bigger.  We finally all went back to our original GZ and started over re-checking each stump and tree.  Jim eventually made the find in a stump I know each of us had look in at least twice before - we all must be blind! 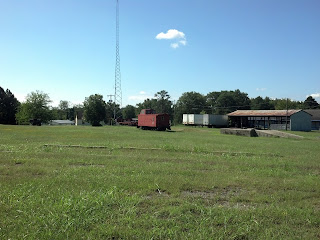 Going back southwest we reached the town of Brodnax which was our original destination because of a Rail-To-Trail located there (Tobacco Heritage Trail).  The previous cachers we had met in Lawrenceville had a series of caches on this trail and we had been looking forward to grabbing these caches all day! 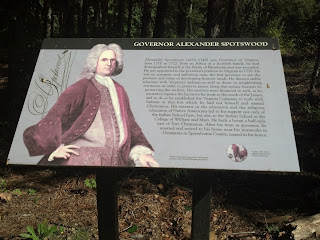 We parked at a mid-point on the trail, unloaded the bikes again and took of easterly.
GC36BPB Lonely Pines:  This cache was very amusing.  Can't give too much away without spoiling the cache but Nana found it and we all laughed!
GC3BQ1A Tobacco Heritage Trail #1 - fairly easy find on a beautiful day to biking this trail
GC3B0TJ - Chet's 1st Cache - enjoyed the hunt here, we made the grab and off we all went
GC3BQ2R - Chet's Big Micro - here is where things began to turn.  We looked and looked, scratched our heads and looked some more.  We never made the find here but sure gave it a good try.
GC3BQ2J - Nugget's Piney Pond Cache - two DNFs in a row.  We all searched and searched but couldn't find that darn rabbit!  We didn't feel too bad though as the cache hadn't been found since early May.
GC3BQ28 - Is This The Beginning or the End? - for us it was the end of this portion of the trail - Jim made the find quickly and we started back towards the van and the other end of the trail. 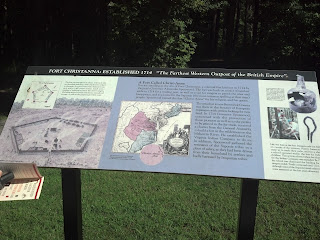 Once we passed the SNAP-mobile we continued on southwestward and started this side of the trail.

GC3B0T9 - Nugget's 1st Cache was a quick bike and grab
GC3B1AP - Runaway Rest Stop - this cache took us a few but we eventually made the grab.
GC3B1CN - Rusty's Crooked Cache - we made it here - got off our bikes and quickly made the grab.  We decided at this point we were to tired to bike the rest of the trail so we headed back to the van and moved it closer to the last 3 caches on this part of the trail.

We moved the van closer then Jim & I walked to the last three caches as the ladies took a break and relaxed.
GC3BPR4 - Rusty's Road Crossing - this was a 4/4 cache and it lived up to it's rating.  We made the grab and proceeded down the trail.
GC3BPNQ - Easy as Pie - HEY! - I like the sounds of this cache - and it lived up to it's name as it was in both the first and last place I looked!
GC3C905 - Needle in a Haystack - didn't really like the things that came to mind as we were walking to this cache but believe it or not we made the grab in less than a minute once we got to GZ.

Jim and I got back to the van and we all were tired.  We figured we could grab a few more P&Gs and then head back home. 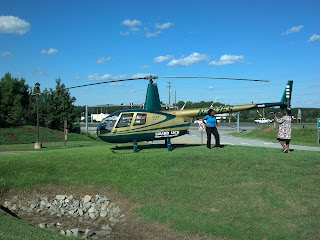 GC33KAG - Hedgehog hangout was supposed to be a P&G and we even left the area and then returned a 2nd time before we finally marked this one down as our last DNF for the day
GC33KAC - Don't Throw Stones was a very cute cache that was not only awarded a favorite point but also named the winner of the "Coveted" Nana & Papa cache of the Day Award.  Very cute container!
GC29TGK - Closed Circuit was a very simple P&G but we did have some excitement - as we were approaching GZ a helicopter was landing at the local ????.  It was the Lizard Lick helicopter.  Now some of you may not know who or what Lizard Lick is - but others will - it is the name of the repo crew on a reality show on one of the cable stations!
GC3KH5P - 1248 - this cache had us a little scared - the last finder had stated the log had turned to mold and mush so we weren't exactly sure what we would find.  We actually found the cache laying out in the open in a little clearing among the trees - we disposed of the previous contents of the container, cleaned everything out, dried the container and then added some swag, a new log, and a baggy to hopefully keep everything dry for the next geocacher.
GC2K7MN - One persons trash... Another persons cache - a scary title but a very quick find
GC39J8Y - Go Dragons - another cache that we found out in the open of a clearing - signed the log and hid it where we thought it should be 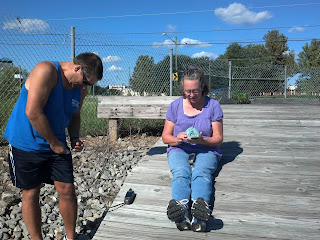 As Jim & I made our way back to the SNAP mobile we decided to call it a day and head home.  We stopped for dinner about 1/2 way home and ended up pulling into our homestead just after 8.

It wasn't until late the next day that we found out something very terrible.  We had 4 cachers with a total of over 7000 finds on a day geocaching trip - we all went through numerous wooded areas - and NONE of us remembered to spray ourselves down.  It really wasn't a big deal until late Monday night - it was an even bigger deal Tuesday - now it is Wednesday - I can can tell you one thing - it will be a very long time before I forget to spray myself down again.  30 to 40 chigger bites - and that is just on my right leg alone - left leg is not so bad but there is one thing I can definitely tell you - there ARE certain parts of your body you NEVER want a chigger bite !!!!